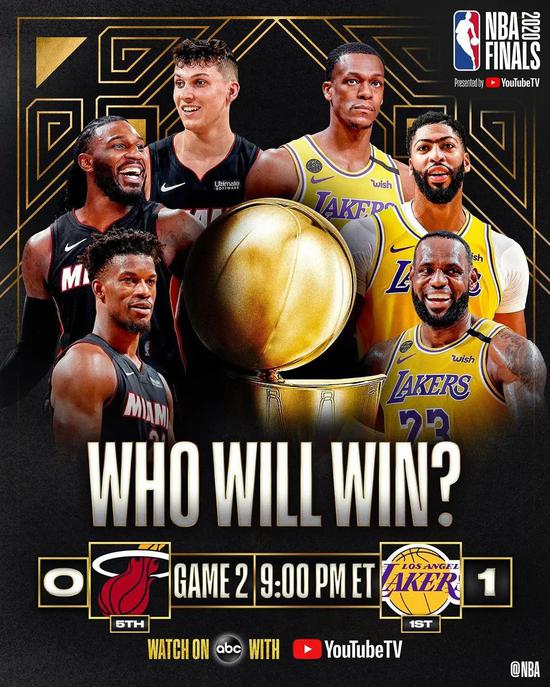 Beijing time on October 3, the finals G2 officially started. Before the game, the Heat ushered in bad news: Adebayor and Dragic could not play this game, both missed. Coach Spoel was forced to adjust the lineup, Leonard and Shiro replaced them in the start. At the age of 20 and 256 days, Shiro became the youngest starter in NBA history and the first post-00 player to start in the Finals.

Since 2018, the Heat have played a total of 171 games, of which Adebayor played 169 games and only missed 2 games. Even if he has a shoulder and neck injury this time, he still hopes to be able to enter the active list, so that he does not need to wear a mask, and it is more convenient to communicate with his teammates. Dragic tore the plantar fascia of his left foot. Both he and Adebayor wanted to fight with injuries, but Spoel and the team refused.

Today the Lakers still wore the Mamba jersey, and their record in this jersey is 3 wins and 0 losses this season. After the start of the game, Butler defended James. In fact, he suffered two deficiencies in the last game. What a tough guy! But Butler alone could not control the game. The Lakers had too much inside advantage. They started 14-8 and stopped the Heat. Howard scored 6 points alone. Some fans ridiculed: Master Huo came to grab FMVP?

Leonard suffered too much inside defense, Spo brought up Olynik, who came up with a three-pointer. In fact, Olynik should have started early, his experience and defense are better than Leonard. Halfway through the first quarter, Lao Zhan went to rest, led by Rondo and Nongmei. Don't underestimate the three-pointer led by Long, otherwise the consequences will be serious!

The Heat once tried zone defense, but the effect was mediocre, and the Lakers made frequent hits from outside. There was no one in front of James 4 meters. Seeing that he was ready to shoot, the Heat also had no players coming. He watched Lao Zhan hit a three-pointer. Is this defense really the finals? The Lakers also made 5 turnovers in a single quarter. After the first quarter, they led 29 to 23.

At the end of the first quarter, Nunn fouled Caruso. Bald Mamba lost his balance in the air, but he was pushed by Olynik again. This action shouldn't be! It stands to reason that his teammate had fouled, Olynik should reach out and help him. Don't help, what does it mean to reach out and push people?

In the second quarter, Lao Zhan singles Iguodala. Do you remember the riding and brave battles of those years? Since then, the Lakers' three-point shooting rate has declined, and the Heat took the opportunity to approach the point difference. But the Heat themselves couldn't make a shot. Duncan Robinson was only 0 of 3 in Game 1, and 1 of 6 in the first two quarters of this game. Prior to this, in the regular season and playoffs, he shot more than 40% from three points. When it comes to the finals, it suddenly fails...

Despite his teammates' inaccuracy, Butler still sent 8 assists in the first half, setting a new personal playoff halftime high. After the two quarters, the Lakers led 68 to 54, with thick eyebrows 15 points and 4 rebounds, James 12 points, 4 rebounds and 6 assists. On the Heat's side, Butler had 11 points, 5 rebounds and 8 assists, and Shiro and Crowder both had 9 points. Will they still have a chance to comeback in the second half?

Adebayor and Dragic did not fight, and Butler became the only safe offensive point for the Heat. Other players are not too young, or they play abnormally, there is indeed a gap in the strength of the two teams. The Heat's insistence on defense is also compelling. There is no one inside, and they can only force the Lakers to shoot from the outside. It's up to fate to make it.

Easy side to fight again, Butler continued to break through to help the team stop the bleeding, but looking back, Lao Zhan can also make it. The difference between the two sides went 20+. To be honest, this year's finals were a bit boring. The only suspense now may be the question of who gets the FMVP.

The most accurate one on the Lakers' side is the thick eyebrow brother, who made 14 of 16 shots in three quarters, which is unsolvable. James thought to himself: You guy with big eyebrows and big eyes, come to grab my MVP?

Nongmei scored 30+ in both G1 and G2 in the finals, becoming the 16th player in the NBA to achieve this in the past 50 years. The first two are Durant in 2017 and James in 2015. In fact, Rondo played well this time, scoring 3 three-pointers in three quarters and scored 16 points.

After the three quarters, the Heat were 93 to 103 behind by 10 points. There is still suspense watching the game, but every time the Heat chases points, the Lakers are doomed. Big Eyebrow scored 15 points in the third quarter, and Perkins, the king of "mouths", began to scream: "I respect Wade, but AD is more compatible than any of James' previous teammates!" Wade responded: " I agree."

The Heat played hard, but they couldn't match the Lakers at every point, and they were always behind by about 10 points in the end. The Lakers can easily crack the Heat's zone defense, I don't know if Spoel will change in the next game. After watching this year's finals, the Celtics should be able to learn a lot of ways to break the defense. Rondo surpassed Larry Bird and Nash in one game, ranking sixth in the playoff history in assists!

James’ steals are really alive and well, Butler is too helpless: I have never seen a 36-year-old player like this! Both Lao Zhan and Thick Eyebrow scored more than 30 points in this game, which is also very rare in the finals!

LeBron James and Rich Eyebrow teamed up to score 65 points, 23 rebounds and 10 assists. No more, there is no suspense in the finals!

During the Mid-Autumn Festival and National Day holiday, login to "NBA Heroes" will give you a season rematch superstar card pack, and you will get nine superstars such as James and Thick Eyebrow at random, just log in to receive! Enter the redemption code: nbahero will have a chance to get a gold card (only in zone 4)! What are you waiting for? Long press to identify the QR code, or click to read the original text, come and try your skills!